A few months on, there has been an opportunity to reflect on the most beautiful couple’s special day.

Natalina was given TBP number via a mum from school. Katie was one of her bridesmaids, and suggested TBP when the florist Natalina was hoping to use was unavailable. With just 3 months to go, our first encounter was on the phone.
“And what date is your wedding, Nat?”
“28th of may, its a Sunday”

Yes, I know, I thought. THAT’S MY BIRTHDAY!

But having spoken to Nat on the phone, heard about her desire to have a foliage only wedding, I knew I HAD to do this. So, we booked in a consultation and got chatting. For anyone who knows me, and for anyone who knows Nat, we both talk. A LOT. So putting us both in the same room to talk about weddings and flowers and all things bridal, was going to end in a marathon chat. Nearly 2 hours later, we had to part ways, and my head was BUZZING!

The most hilarious thing about Natalina, was that throughout the process, she just kept adding to her order! Her strict budget was blown out the water and she told me to just do what I needed to do. Having that trust was incredible, because I could play with different textures and styles to get the look she was after.

What was even more hilarious, was how often she recommended TBP. I then had an extra 2 bookings as a result, both awesome and as unique as her wedding, in their own way.

The day before the wedding, I took myself, a car load of foliage and two mini-blossom helpers to the yurt she had put up on her aunt’s farm, and we got to work. Fresh water vases for the tables, a foliage hoop and leaves literally anywhere they would go! The following morning, I delivered the bouquets to her and her 9 bridesmaids. I also dressed the flower girl’s wheelchair which was a great challenge to have been given! The buttonholes were sent on to the groomsmen and they were all ready for the big day!

Working with Natalina gave me such a buzz. Her beautiful character and personality was like a massive ray of sunshine whenever she called or walked into the room. Her kind and caring nature, too, was just a wonderful thing to see. After a whirlwind planning period with her, I felt as though I was working for a member of my family. She has been the easiest client to date, an absolute pleasure to help and I absolutely adore her and her tribe.

I’ve attached the video taken and edited by the awesome Joelle Sayles. She really has captured the couple so well, and they looked like they had the best day. Take a seat and watch it, it’s just brilliant!

Have a very happy ever after, Natalina and Beybe x

Trackback from your site. 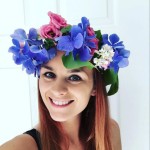